This question peeped through my mind all the while throughout the day as I was sitting on the first bench of my Orientation Programme before starting my articleship days “As to why this 35 hours are a necessity when all you do here is just speak, chatter all round and nothing else?”

The question hovered me even on the last day and I wondered when will it be answered. And yes! It was answered rightly on the very first day of my articleship (where I was interviewed before, which as well included communication skills – because the interviewers didn’t scrutinize my results deeply, all they were interested is the way I present myself). It was my first day of articleship where I was accompanied by my senior and colleagues, and I was handed over a file to compare the TDS as per books, TDS certificates along with form 26AS. I was blank because all this was read in books but I never knew how to download 26AS, neither was I thorough with the accounting software. I kept staring at the files for a while with an awkward look till my senior came and with the bossy voice instructed me – “If you aren’t aware of things, ask for help and start working immediately!!” And then, I understood why was OP conducted, those 35 hours did work miracles and I could get through things.

Basically, not only on the office desk but at every platform communication plays crucial role. Giving you an example how effective communication helps you to make the listeners visualize better and in turn it makes the process of understanding the facts better. Let us just compare – and ask yourself which sounds better and conveys better.
1st way – I started my morning with coffee
2nd way – I opened the chilly winter morning by treating myself with a steaming hot aromatic coffee.

I am sure the second way makes you feel the situation right. Same happens in our teams while working, if we can convey the ideas well, we can convince well and gradually that affects our career growth. There are many ways through which we can be effective communicators like effective listening, reading of facts and having knowledgeable content to share in the right manner with the RIGHT TONE (very important when you are in a verbal conversation)
Simple way to start can be add minute details to your observation and these will be automatically added to your words.

Speak sensible and Spread your ideas.

He was travelling back to India nearly after some 18 months! He was going to see his ailing mom, his darling wife and recently graduated sister after so many days, weeks and months. There on the airport waiting in the queue to get the primary check-up done which was mandatory for every international flight passenger due to recent epidemic outbreak of CORONA, he just happened to sneeze and not to his surprise this time his sneeze accompanied him with all eyes looking at him as if he was a culprit in the town, there was no bless-you after the sneeze anymore! People just shifted apart from him, his own family members who were waiting for him were not so eager anymore and insisted on to see the hospitals before. People had concerns of their kids, their families back at home, their future, their health and the list continue! No one wanted this man even in a meter’s radius!

The only person who came and touched was a simple masked doctor, well he too had a wife waiting at home for the night’s dinner, his children waiting to share the day’s stories with him, parents who looked up to him as their support to old age. He too was concerned about his health but still he stepped forward to take this man to a cabin where detailed checks were to be done!
Why this incidence!!??

We see fluent attacks on doctors happening all round the country, there are huge break outs done at their dispensaries or hospitals just because of a natural death of their closed one! Doctors are not GOD!! They are just a medium through which we have hopes to get cured well, through which we see a better and easy lifestyle, they do all they can to save a life but it isn’t magic – that a doctor touches a person and woohoo!! All is done right!!
They are humans, it is a fact that sometimes there are errors and, in their profession, a slightest error costs a life and so they are normally people who are much sincere and committed to their profession! All I want to convey to all of you reading this is – they too have a family back where they are needed, they have never backed out on their responsibility – be it midnights or be it wee-mornings! They have sacrificed their personal lives as well for the betterment of the society! So, as a human being let us be a little sensitive as well and thank them for all they have done and will be doing! Respect doctors – because if they fall short in committing their time and sincerity towards us, epidemics like Corona, Swine flu will be more of disasters for entire human race!!

Proud to be a daughter of two highly committed doctors and also associated with number of doctors directly or indirectly!! Thank you for all your efforts and honest advices which saved 100s of lives till now!!

A wonderful quote read at one of our client’s premises! The audit place is usually seen as pressure and deadlines with an expectation to have a highly active mind to catch up all the discrepancies and hidden transactions of all the entire year! So here normally I am on a mood of complete professionalism where the usual chatter box of my own self is turned to on to mute mode and mind is all vigilant!

Gazing around the premises to take a rough idea of the nature of business, I came across this inspiring quote. It just took my attention away, as it had so much to be thought on!

Forces inside you can make you a complete new person – kind of ready to face the world! It can shape you and sharpen you! It had multiple meanings – and I could just not stop thinking ahead on every front! Being as simple as – People may scream that it is high time for you to continue and suggest to give up, circumstances may shout where you feel like that is all you can do but one single thought from your heart whispering to you in the lowest voice possible can get you new rays of hope. Smiling through all once if you trust that inner voice you might as well have a cake walk through all backbreaking situations!

Just sit back and think on this quote and start a journey of self-motivation!

Principles in life are very important! They help you survive when you are hit hard by tough situations; they help you make right decisions and in setting your priorities in life, especially in this fast-changing world which is full of uncertainties. Ira ki Kahaniyan is the author’s attempt to share his life’s principles in the form of poetry. Since the book is aimed at educating children, the author reinforces the importance of hard work, relationships, friendship, good health, living in the moment, education, equality, power of dreams, importance of karma, festivals, patriotism, environment and gratitude through a wise little girl, Ira.

One more reason why I am including this book in my blogs is that the author has decided to share all its proceeds (from book sale) with CRY (Child relief and You). To aid its sales, I want this to reach out to schools, libraries, children’s centers catering to diverse segments of children in addition to your own circle of friends and family. This fun-filled unique book of wisdom, will help storytelling by teachers, enhance reading competency in children and make all involved fall in love with ideas and words!

The book is already published and is on amazon 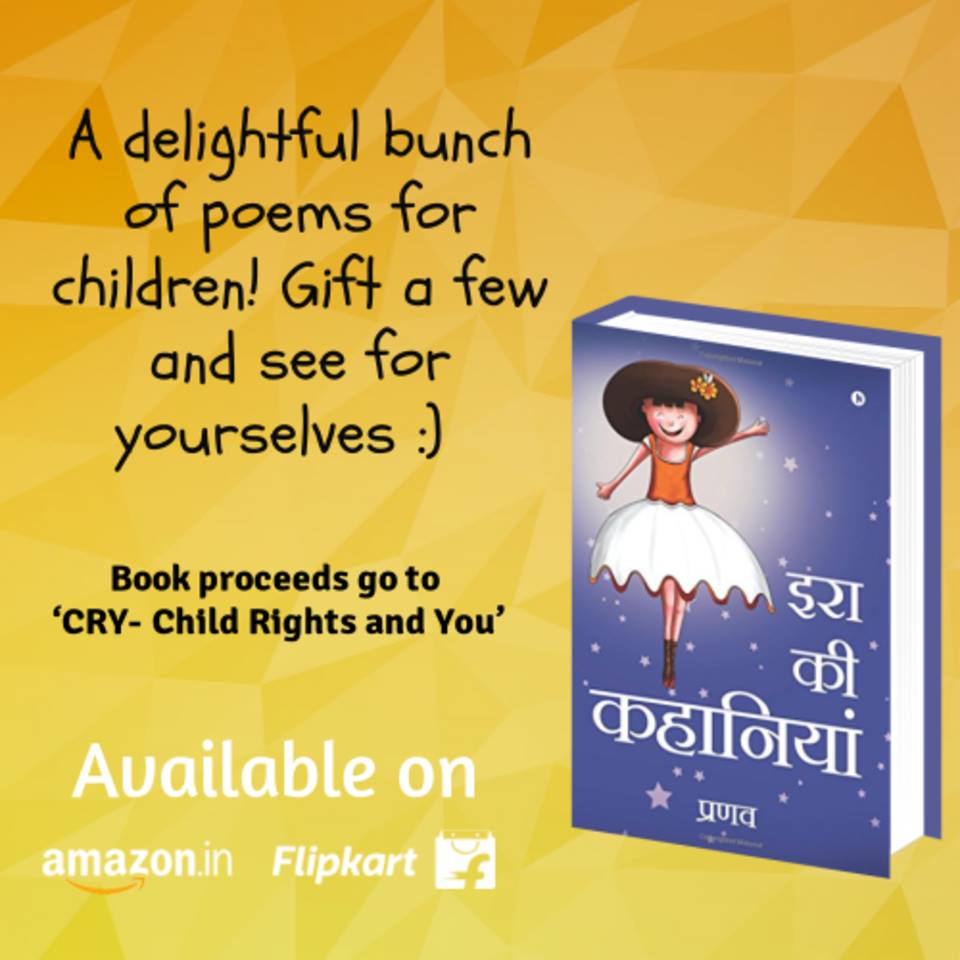 Life has its own twists and turns………..and to see a world you dream of in every dream….you need to cross all limits……and all limitations